The most commonly used operator in a computer language is the value assignment operator ( = ). For example, the statement

assigns a value of 5 to variable x.

As you already know, this is equivalent to the left arrow used in flowcharts.

Probably the left arrow used in a flowchart is more convenient and clearer than the value assignment operator ( = ) sign because it shows in a more graphical way that the value or the result of an expression on the right is assigned to a variable on the left.

In mathematics, the following two lines are equivalent:

On the other hand, in a computer language, the following two statements are definitely not equivalent. In fact, the second one is considered wrong!

But what about the second one? Think! Is it possible to assign the value of x to y + z? The answer is obviously a big “NO!”

Remember! In a computer language, the variable on the left side of the ( = ) sign represents a region in main memory (RAM) where a value can be stored. Thus, on the left side only one single variable must exist! However, on the right side there can be a number, a variable, a string, or even a complex mathematical expression.

In Table 1 you can find some examples of value assignments.

Confused about the last one? Are you thinking about your math teacher right now? What would he/she say if you had written a = a + 1 on the blackboard? Can you personally think of a number that is equal to the number itself plus one? Are you nuts? This means that 5 is equal to 6 and 10 is equal to 11!

Still don’t get it? Let’s take a look at how the CPU and main memory (RAM) cooperate with each other in order to execute the statement A ← A + 1.

Let’s say that there is a region in memory, named A and it contains the number 13 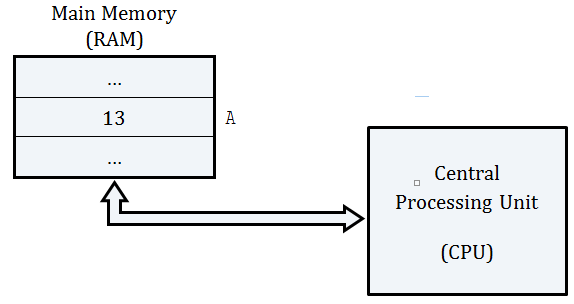 When a program instructs the CPU to execute the statement

the following procedure is executed: 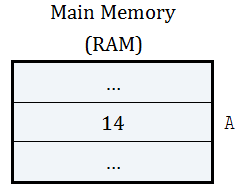