Sometimes you may need to use a value that cannot change while the program is running. Such a value is called a “constant.” In simple terms, you could say that a constant is a locked variable. This means that when a program begins to run and a value is assigned to the constant, nothing can change the value of the constant while the program is running. For example, in a financial program an interest rate can be declared as a constant.

A descriptive name for a constant can also improve the readability of your program and help you avoid errors. For example, let’s say that you are using the value 3.14159265 (but not as a constant) at many points throughout your program. If you make an error when typing the number, this will produce the wrong results. But, if this value is given a name, any typographical error in the name is detected by PHP, and you are notified with an error message.

In a flowchart, you can represent the action of setting a constant equal to a value with the equals sign, ( = ).

Notice: You can use the reserved word Const to distinguish a constant from a variable.

Consider an algorithm that lets the user enter the prices of three different products and then calculates and displays the 20% Value Added Tax (known as VAT) for each product. The flowchart in Figure 1 shows this process when no constant is used. 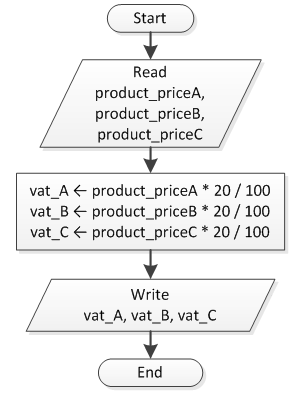 Even though this algorithm is absolutely correct, the problem is that the author used the 20% VAT (20/100) three times. If this were an actual computer program, the CPU would be forced to calculate the result of the division (20/100) three individual times.

Notice: Generally speaking, division and multiplication are time consuming operations that must be avoided when possible.

A much better solution would be to use a variable, as shown in Figure 2. This reduces the number of division and multiplication operations and also decreases the potential for typographical errors. 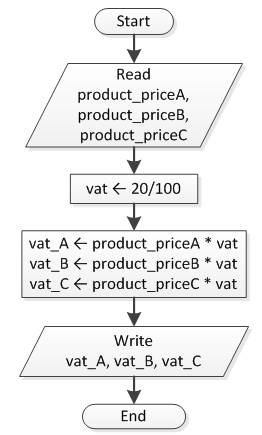 This time the division (20/100) is calculated only once, and then its result is used to calculate the VAT of each product.

But even now, the algorithm (which might later become a computer program) isn’t perfect; vat is a variable and any programmer could accidentally change its value.

The ideal solution would be to change the variable vat to a constant VAT, as shown in Figure 3. 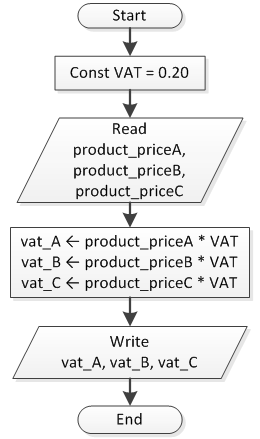 Notice: Please note that when a constant is declared, the equals symbol ( = ) is used instead of the left arrow.

This last solution is the best choice for many reasons.