A flowchart is a graphical method of presenting an algorithm, usually on paper. It is the visual representation of the algorithm’s flow of execution. In other words, it visually represents how the flow of execution proceeds from one statement to the next until the end of the algorithm is reached. A flowchart cannot be entered directly into a computer as is. It must first be converted into a programming language such as C++, C#, or Python.

The basic symbols that flowcharts use are shown in the table that follows.

The following is an example of a flowchart. The algorithm prompts the user to enter three numbers and then calculates their average value and displays it on the computer screen.

Remember! A flowchart always begins and ends with a Start/End symbol!

In this problem, two different messages must be displayed, but only one can appear each time the algorithm is executed; the wording of the message depends on the average value. The flowchart for the algorithm is presented here. 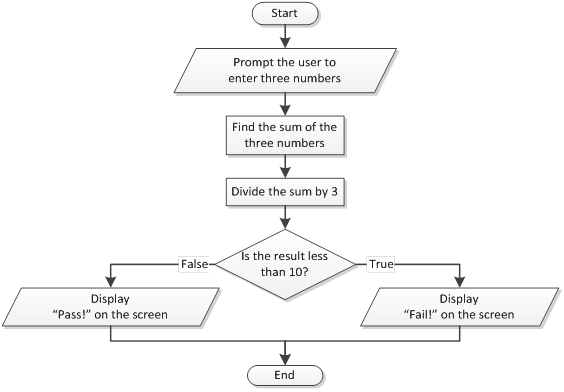 Notice: To save paper, you can prompt the user to enter all three numbers using one single oblique parallelogram.

Remember! A Decision symbol always has one entrance and two exit paths!